THE   BACKSTORY:  ALL ABOUT THE CREATION OF EMERALDS, A PASSIONATE GUIDE

Here we will provide you with background revelations from the making of this book. This section will also have updates and emerald information. You will find paragraphs and entire pages that got cut out of the book simply because of space considerations. Many items get cut out because, although the author thought they were beams of  genius, the editor chopped them out and they ended up "on the cutting room floor."  They will be revealed here.

Such items are still interesting, especially to readers who already have gone through Emeralds, A Passionate  Guide and want a greater perspective. Items will be added periodically with the most recent at the top.

Back to Emeralds A Passionate Guide Main Page

<>   Gemology Can Be Dangerous: The backstory of the photo on page 107, in Chapter 5

Everyone loves the cover of Emeralds, A Passionate Guide. Designed by Colombian artist Cristina Lopez, it has generated complements from professionals in the publishing trade to students. Did you know that it only came about at the very end? Did you know that, as the author, I had designed some potential covers which, thankfully, never came about!  Here below, behold some of the "almost contenders" for the cover of the book.

<>A Poetic Moment  --This piece would have gone at the end of the Poetry Chapter. But the book was appraching 400 pages and the editor told me to trim down. I knew this had to go. Read it here; it gives substance to the atmosphere of the chapter:

This book has attempted to show the passionate side of emeralds and the importance of people in the study of gems.  Besides being introduced to the world of colored stones through the example of emerald, it is hoped that an injection of passion has been the outcome of reading this book. The chapter on poetry cannot be complete without a story, this story, that includes emeralds, passion and poetry all blended together in one special moment, a moment of singularity unlikely to be repeated:

The buildings along Jiminez and Septima house the emerald offices where comisionistas (brokers) carry merchandise from buyer to buyer. The office of Oscar Baquero is often full with the lively activity of buying. Two Italian buyers were present, with two Colombian buyers and myself all busy among the four rooms and the reception area. Paolo, an Italian buyer and I were passing hours in Oscar’s office, either working by selecting emeralds or waiting to work. In between parcels of emeralds we would make conversation: the American, the Italian and the Colombian points of view always contrasting. Oscar would offer his philosophical viewpoints on everything as well as accentuate certain moments with the lyrics of romantic boleros.

One day at the height of mid-day bustle, with the three of us finishing up with five comisionistas, most of them ladies. We were just about to let them out of our office room and have some others come in who were waiting outside the door when Oscar put his hands up and stopped everyone; “Close the door,” he said.  He handed a piece of paper to the young lady in front of him. “Everybody listen as Monica reads this,” he announced. People stared at him; “Go ahead and read it,” he said. It was a poem by the romantic Latin American poet Jorge Luis Borges. I forget the poem’s title but it was full of longing, desire, sweetness and sadness over the universal theme of women and men in love. One line went, “Who would have believed that I would have found floating in the air, almost hidden, your gaze…”

It was a long poem. I remember how everyone’s incredulity at such a reading in the middle of a business day slowly changed into personal rapt silence. I sat with my mouth open: I was the practical American businessman concerned with efficiency and time, and here I was listening to Borges! The sounds of ten people outside the office door bothered me at first but soon melted. Emeralds sat in the room, glimmering on their open stone papers.  Oscar’s face waas content; it had meaning to it. I became aware of the street sounds from the window. The sounds of the outer office combined with sounds of all Bogotá as the whole world stopped to allow a poem to be read. It was a great moment. It had meaning.

<>   THE COMPU: This image shows my tired but trusty laptop. This was where the entire book was written. Notice the glue on the left hinge: it is starting to crack at the frame. This is a 1G Hz Titanium Powerbook; the last of the Ti Powerbooks. I purchased it for $1800, used, from eBay on January 2004. Now, in 2009 it is really used! The book's final image preparation however, was done on a 24-inch iMac Flatscreen (the one with the ultra-clear glass screen) and Adobe CS3. 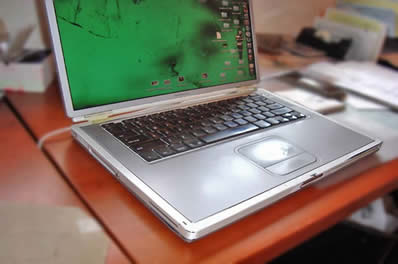 <>  THE ROMANCE CHAPTER, PART 2:  I really wanted to include this classic scorcher of a kiss painted by Hayez.

It captures all the best ingredients: masculinity, desire, tenderness, surrender, passion and a cool feathered hat. 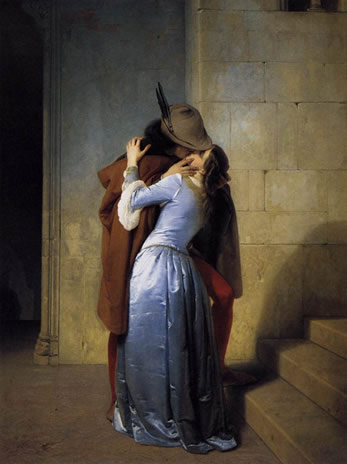 Notes on Page 29: As I wrote in the book, the stories in this whole section are true, even down to the name of Lorena's dog. The upper picture on page 25 is the lovely Sandra Salamanca, whose father was an emerald dealer in Bogota's vibrant downtown emerald market.  She learned the business from his office, and I must say that I too, learned a thing or two from Señor Salamanca.  Sandra can befound often going between the offices of the major dealers at New York's 47th Street district when she is not back in Colombia. 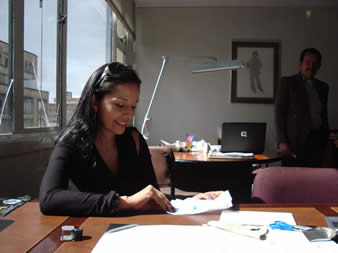 As for "The Emerald Kiss: 18 Years in the Making" I will introduce you to Bruno Fuccini, 6'4" emerald dealer, playboy and

raconteur.  He is a successful and honest dealer but has been known to steal a kiss now and then. The funny thing about being a

thief of kisses is that the punisment for getting caught is often very lenient. The victims of those crimes show hardly any outrage at all! Such punishment is definitely not severe enough to discourage further robberies in the future.

Bruno Fuccini (second from right) at lunch with stone dealer friends in a restaurant in downtown Bogotá. 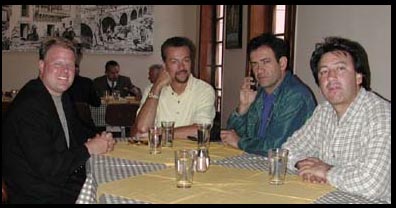 Please send e-mails with questions on any chapter or any story and I will try to give you The Backstory.

<>  Chocolatina returns to find her picture in Emeralds, A Passionate Guide 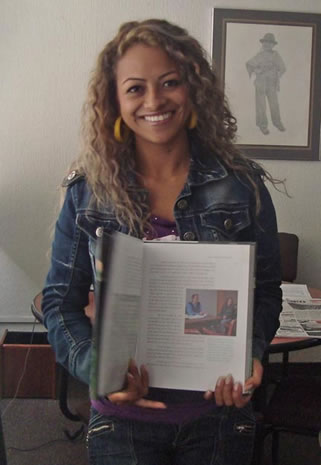 This image depicts multi-year comisionista known only as 'Chocolatina' in the office of Oscar Baquero holding the book to page 27 where her picture appeared. While delighted to see it there, she said, "I will ask for a copy of the book only when it is published in Spanish."  THE NEWS is that the book is being translated right now for 2011 publication into Spanish.

Page 29 describes the travails of Adriana Usme, the heroine of "Emerald Intensity". In that section of the chapter, I mention a murder attempt that was perpretrated on her and how she survived. But right after mentioning that I wrote, "but that is another story." My narrative went back to other things. But here in The Backstory I can relate the details. And what a story it is:

During the late 1980's there was tension in the emerald district. The mines were fighting among themselves and the rivalry was felt as tension in downtown Bogotá, That tension manifested itself in the form of bank robberies, numerous bounced checks among dealers, and, at its worst, a gang of robbers whose modus operandi was to kill their victims with a hammer in order to get their emeralds and money. After several unsolved murders of this kind, Adriana was attacked in the same way and robbed. However she did not die: she was in a coma for ten days, blind for a month, and then recovered. She was able to put the finger on the men who tried to kill her. Her identification of the gang helped end that dark era in the emerald district. I had heard of this fantastic story years before I finally met her. She now brokers emeralds, raises two children, and still exudes an energy and enthusiasm for life that is delightful and contaigious.

In describing the comisionistas (brokers) of downtown Bogotá, I used the words of storyteller Louis Kornitzer. His description is so apt that I repeat it here:

“If you are interested to discover which of them are dealers and which are brokers, you have only to peer into their faces. The haggard and pale, the worried-looking ones, those are the dealers. The sleekly complacent and jesting ones are the brokers. Must I explain? The dealer has to take and give credit. Any error of judgment when appraising goods is upon his own head and his is the entire risk. But the broker is merely the go-between. Heads or tails, he wins. He obtains a brokerage from both buyer and seller, 1 percent from either side, and the merchants have to pay him whether they register a gain or a loss.”

Below, you see three images of a modern comisionista in the office of Oscar Baquero in Edificio America. Behind her is Italian emerald dealer Paolo Magnani offering a running commentary of the transaction: I had just bought a small emerald, and rather than the usual 20 day terms for payment, I paid in cash, resulting in a warm smile.

Tribute to Maurice Shire who died in January, 1990: I am saddened at the passing of gem dealer Maurice Shire. I knew him to be a family man, a pearl expert
and an emerald expert. As an emerald lover myself, I remember reading everything he wrote in the 1980's as I tried to teach myself the intricacies of the emerald.
I was impressed when I finally met him and delighted in his refined demeanor and friendliness. It was immediately apparent that he was a great salesman and a passionate emerald person. This redoubled my desire to be like him. His career was long and rich; encompassing the "good old days" of gem dealing as well as the challenging New Millenium. He will be missed by many people and I send all best wishes to his family.

Tribute to Antonio Barriga (1921 - 1990) : Colombia's first active gemologist and author of Esmeraldas de Colombia. In my formative years as an emerald dealer I always encountered him as a fountain of knowledge and an example of consummate professionalism. For several years his book sold in the GIA Bookstore and is now out of print.  Barriga did the first scientific study of trapiche emeralds and actively collected specimens in the mining region of Muzo. 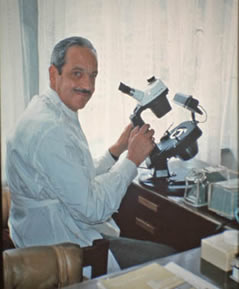